In most situations when you need to do a packet capture, the problem doesn’t last long and usually happens randomly. But once you narrow down the issue to a particular time or activity, you will need to set the right action plan to tackle the problem. Packet capture is now much easier, simpler, and faster than before.

Dynamic Packet Capture facilitates fast troubleshooting and easy debugging of microservice connectivity issues and performance hotspots in Kubernetes clusters. It is a Kubernetes-native custom resource that runs as part of user code against specific workloads in the cluster, without the need to execute any programs inside the cluster. Dynamic Packet Capture integrates with Kubernetes rule-based access control (RBAC), which allows teams to troubleshoot workloads within their own namespaces without affecting the rest of the Kubernetes cluster. Additionally, within the same cluster or namespace, the RBAC integration helps differentiate between who can run the packet capture and who can retrieve the captured files.

Four things you can do with Dynamic Packet Capture

With Dynamic Packet Capture in Dynamic Service Graph, all it takes is a single click to start a packet capture based on the user’s role assigned in the namespace.

Let’s see how it works!

Complete the following steps to run a packet capture:

Preschedule packet captures to start and stop when needed

Schedule a traffic capture for 5 minutes between 3:32 UTC and 3:37 UTC for all workload endpoints in the sample namespace.

Customize packet captures according to port, protocol, and namespace

Give the packet capture job a name and select a time interval, port, and protocol. Then click Run. 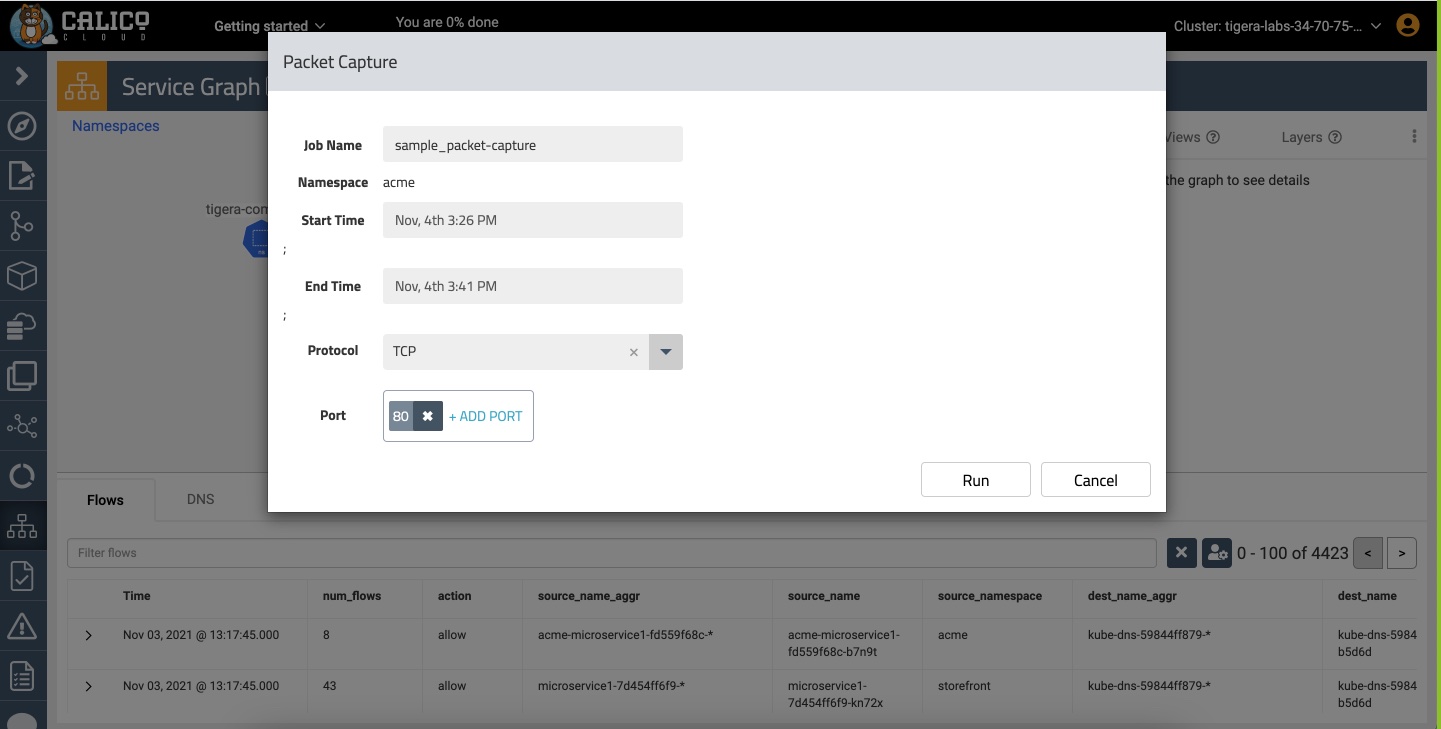 From the Capture Jobs tab in the bottom panel, you can:

Now you have everything you need to troubleshoot your microservices and applications quickly and efficiently. If you prefer to have packet capture as part of your code, refer to the example of the packet capture manifest files in this article.

Ready to try Dynamic Packet Capture for yourself? Get started with a free, 14-day Calico Cloud trial.