Deploying to Kubernetes: The GitOps Way

Kubernetes adoption comes with a lot of challenges. One of them is consistently deploying applications to the platform. GitOps is a strategy which solves this problem and solves it at scale. In this blog, we will share how to leverage TravisCI and ArgoCD to design a highly scalable production-ready CI/CD workflow.

GitOps follows one simple principle “Git is the Source of Truth”. The entire pipeline can be divided into two broad categories. (1) Continuous Integration, where we enable our developers to develop new features, test the code and merge it into a master. (2) Continuous Delivery, where we release new versions of the code for our customers. 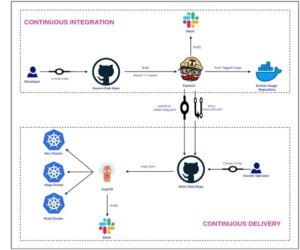 The application and the Kubernetes manifests/helm chart both reside in a git repository. The application source code’s git repo consists of various branches. Following the same principle, we also keep the helm charts for our microservices in a git repo itself. For the sake of this blog we will assume that each source code repository will have at least three (3) branches.

The overall structure of the application’s github repo can be visualized as follows:

src is the source code for the application

README.md is the readme for this application which lists usage, instructions and dependencies, etc.

Makefile is the master build file which will consume all other files/directories along with some environment variables to generate docker images and packaged helm charts.

Dockerfile is the dockerfile for the container running in the Kubernetes pod.

.travis.yml is the main CI configuration which will be consumed by travisCI to implement our workflow.

Similarly, the github repo for the helm charts may look something like this:

This repository will contain the helm charts for all our applications. It should be noted that all our helm charts along with the values.yaml file also contain the following:

values.dev.yaml: These are the override values which will be used by the application in the development environment.

values.stag.yaml: These are the override values which will be used by the application in the staging environment.

values.prod.yaml: These are the override values which will be used by the application in the production environment.

In order to deploy to the staging environment manually, one would run:

We will want our CD tool to follow a similar convention.

It can be explained in the following points.

This pull request only modifies the image tag which will be deployed to different environment. The following makefile encapsulates all of these.

An important concept here is to understand that we are using git sha (short) to tag the images with the commit-id. The same convention is followed throughout the process and we subsequently update the helm chart with the same naming convention in order to maintain consistency. Now all of these make targets will come together when you implement them in our CI configuration. Today we will take an example of TravisCI. The following .travis.yml consumes the Makefile at the source of our repo and runs our entire pipeline.

Once, the image is built, pushed and the helm repo is updated. It is time to deploy our changes to a target Kubernetes environment. This is where the handoff from CI to CD takes place.

ArgoCD is our tool of choice when it comes to continuous delivery. It is super-easy to install and configure. The most important question around a GitOps pipeline is  “When to Deploy ?” So, let’s address that first. The deployment workflow for various environments is as follows:

Dev Environment: A commit/merge to the Dev branch of the application source code.

Scenario I: When we merge the PR created by the Dev deploy, the docker image is rolled out to the Staging Environment.

Scenario II: A commit/merge/nightly build of the Staging branch of the application source code

Production Environment: A commit/merge to the Master branch of the application source code.

This workflow ensures that the deployments to Production environment are always first deployed to Staging. It is very important to have this in place from a site reliability perspective. The ArgoCD configuration for the production deployment of an application may look something like this:

You can have a similar configuration for staging and dev deployments with different Kubernetes clusters as a destination. Once the application has successfully synced we should get a notification similar to the one shown, below.

And the resources can be visualized on the ArgoCD Dashboard.

I believe this helps us to get started with GitOps pipelines. Adopting a GitOps methodology has a ton of advantages, the most important being the transparency it brings between the application configuration deployed in a Kubernetes cluster and the one residing in the git. Feel free to reach out if you have any questions!